If you use a KVM switch to move between a PC running Windows and a PC running Linux, you’ve probably encountered Drunken Mouse Syndrome, in which, upon returning to the Linux box, you find your mouse pointer freaks out and behaves wildly, unpredictably, and angrily when you so much as breathe in the direction of your input device. For a long time I assumed that Drunken Mouse Syndrome was the fault of my KVM. Turns out, (1) that’s not true, and (2) there’s a fix.

Drunken Mouse Syndrome only occurs if the mouse that’s connected to the KVM switch is a PS/2 style mouse and there’s a Windows box in the mix. If you’re switching between Linux boxen, you’ll have no case of DMS. The source of the problem, according to some information I found via a particularly grueling session with Google, is the Windows implementation of … read full post » 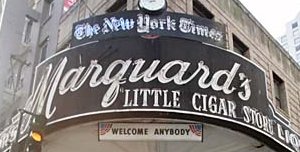 You recognize this sign, doncha? Sure, Marquard’s has been at the corner of O’Farrell and Powell just about forever. Well, walk on by and take one last look, and maybe pick up one last paper: the Chron reports that Marquard’s is soon to be replaced by Hat World, “a huge national chain specializing in logo caps,” which the residents of SF have clearly been clamoring for. And thus the entire Union Square area is one step closer to being just another mall, albeit one that doesn’t share a common roof.

Combine this sort of news with the word from Sacramento that Governor Ahnold is going to force Caltrans to switch gears mid-project and build us an ugly-ass viaduct to replace the eastern half of the Bay Bridge, and you begin to think it’s only a matter of time before our entire environment is nothin’ but chain stores and concrete. Sigh. … read full post »
My vote for Idiot Parent of the Year goes to “Confused in Virginia,” who wrote to Dear Abby this week:

My 16-year-old daughter went to a party at a frat house where she was given a great deal to drink. Feeling “woozy,” she went outside. One of the “boys” suggested she go back to his room to lie down. She had known this fellow before that night and trusted him. She was drunk, and he had sex with her. It was her first time. She claims she tried to make him stop, but he wouldn’t.

Shouldn’t the young man be punished in some way? I feel something should be done, and I also worry about him doing this to some other girl. Would this constitute date rape?

Let’s get this straight: You let your daughter, at the tender age of sixteen, attend a frat party, where she boozed it … read full post »

You’re eating a buncha pistachios. Inevitably, there are a rugged few in the mix who’ve never deigned to crack their shells open even the slightest bit. Your attempt to finish your snack fails, unless you decide to get violent with the offending nuts. (And you probably don’t want to, because, as Mike’s Nuts informs us, “Closed shells mean the nutmeat is immature,” so if you actually do crack that stuff open, you’re probably in for some fart jokes or something.)

But no more. Some bright dude has invented a new machine that will help pistachio packers save you from this nightmare.

[spotted at Follow Me Here; special thanks to Mike’s Nuts]
People keep asking me what I think about the election. They usually ask because they recall that I studied Political Science and know that I’m a political junkie. They very rarely like what I have to say, and want to argue with me, which is exactly why I don’t discuss politics with friends very much, because I despise political arguments. Especially because, well over fifty percent of the time, it’s clear that the person trying to argue with me isn’t even familiar with the fucking Constitution. Folks, if you want to speak intelligently about the political system that governs your life, you need to go back and fill in the knowledge gaps you earned by sleeping through your civics class back in high school. Don’t come around telling me what Congress should and should not (or could and could not) do until you can tell me who the majority and … read full post »
A coalfield fire that has been burning for 130 years in China has finally been extinguished. “The continuing blaze is also thought to have caused environmental damage to the region.” Gee, ya think? We’ve got our own coal fire problems in this country; witness the now-empty town of Centralia, Pennsylvania, which has had a fire burnin’ beneath it since 1961.
Need to pull the Internet out of the air when you’re traveling? Here are the top five domestic hotel chains offering free WiFi.

[spotted at Fark]
Change comes slowly at The New Yorker. From its inception in 1925 until sometime in the 1960s—I once nailed down the date by combing through old issues in the library at Cal—it didn’t even sport a table of contents. When Tina Brown became editor in the 1990s, photographs and letters to the editor appeared for the first time. (When Spy magazine was still around, it used to print “Letters to the Editor of The New Yorker,” since The New Yorker didn’t.)

The current (masterful) editor, David Remnick, has made a few evolutionary changes to the pub himself, but none as striking as the magazine’s first-ever endorsement of a presidential candidate, which has grabbed a lot of buzz today. It’s no surprise who they’re behind—the mag has been relentless in its coverage of the Bush administration’s lies and missteps—but the rather lengthy argument presented (which apparently unfolds over five … read full post »

Bush’s supporters demand lock-step consensus that Bush is right. They regard truthful reports that Saddam Hussein had no weapons of mass destruction and was not involved in the September 11 attack on the US—truths now firmly established by the Bush administration’s own reports—as treasonous America-bashing… . Conservatives don’t assess opponents’ arguments, they demonize opponents. Truth and falsity are out of the picture; the criteria are: who’s good, who’s evil, who’s patriotic, who’s unpatriotic… . These are the traits of brownshirts. Brownshirts know they are right. They know their opponents are wrong and regard them as enemies who must be silenced if not exterminated.

Paul Craig Roberts (a conservative) explores how the Right lost its taste for the truth.

John Lennon might have turned 64 years old tomorrow had he not been gunned down in 1980. A new exhibition of his paintings to mark the occassion makes me wish I were in New York. Luckily, the Guardian has some of the images up on the Web.

[spotted at the J-Walk Blog]
“Hello. My name is George Bush and I’m running for President. Please consider my qualifications as set forth in the following resume.”

[spotted at The Morning News … anyone know of a similar document for Kerry?]
Issy is not yet displaying all 30 Hallmarks of Felinity, but she’s definitely got 1-5 and 19 down pat. How ‘bout your cat?

He also said, at the same speech at Harvard, that the 17th Amendment — which provides for the direct election of U.S. Senators by the people — was “a bad idea.” Here’s the full report.

[spotted at Fark]
The onetime musician formerly known as Cat Stevens has a few things to say about where we’re at today. It seems that in Bush’s America, there’s no room for a man of peace named Yusuf Islam.
I have two long, narrow rugs adorning the hardwood floor in my hall at Chez Newton (The Global House of Chillage). Until recently, said rugs were held in place by these nifty sorta-sticky things that IKEA makes that go under rugs. The IKEA name for this sorta-sticky thing is Patrull, a strange name to be sure, even for IKEA. And I’m pretty certain that the plural of Patrull is Patrull. But I digress.

The problem with Patrull is that over time, they lose their grip and you need new ones. Not wanting to deal with the traffic and parking nightmare that is modern-day Emeryville, I decided to stay away from IKEA’s brick-and-mortar store and instead head to IKEA.com to order myself a new pack o’ Patrull.

I successfully located the Patrull I wanted and placed an order. IKEA.com soon sent me an e-mail that read, … read full post »
Tuesday night, two members of my reading group told me—with absolute seriousness—that if George W. is re-elected, they’re leaving the country. While I understand the emotions that drive such a plan, I think it’s terribly shortsighted to think that all is lost and the only way to live in peace and sanity is to pack up and get outta Dodge. I’m as upset about the current regime as anybody, and even more upset about John Kerry’s rudderless campaign. But I’m already growing weary of the whining I’m hearing on the left. It seems Jon Carroll is sick of it, too.
My photos from Burning Man 2004 are now on display in the museyroom. With that done, this blog should start to flow again.
No posts for a while, I expect. I am Burning Man bound.
U.C. Berkeley Linguistics Professor George Lakoff has been arguing for years that conservatives are better at using language to frame debates in such a way as to give them a distinct advantage. He’s got a new book coming out on the subject, and this interview is fascinating.

Why do conservatives like to use the phrase “liberal elite” as an epithet?

Conservatives have branded liberals, and the liberals let them get away with it: the “liberal elite,” the “latte liberals,” the “limousine liberals.” The funny thing is that conservatives are the elite. The whole idea of conservative doctrine is that some people are better than others, that some people deserve more. To conservatives, if you’re poor it’s because you deserve it, you’re not disciplined enough to get ahead. Conservative doctrine requires that there be an elite: the people who thrive in the free market have more money, and they should. Progressives …