Two things are clear. First, tasers are not nonlethal weapons. They kill people. Further, they bring out the worst in a particular type of bad cop: the sort that is rather too quick to inflict debilitating, nightmarish pain on anyone who doesn’t immediately fall into line.

Last night, some cops repeatedly tasered a student at UCLA’s Powell Library. His crime? Refusing to show ID. Does this sound right to you? It sounds scary as hell to me. It’s the sort of story that makes me want to stop using the word “cops” and start using the word “pigs.” I try to reject that urge, because I don’t want to fall into the mindset of thinking all police officers as enemies. But these officers at UCLA? Pigs.

Another student caught the incident on video using a cell phone. Hmm. Perhaps the increasing ubiquity of video cameras in … read full post »

“The reason I’m here today, the reason I own a brand new Harley-Davidson motorcycle and the reason I have a big log cabin and I got cars and all kinds of stuff is because I’m a writer and writers own everything.” — Dan Aykroyd [emphasis mine]

Pictures of dog noses just make me feel better about things.
The Star of India is one of the jewels of my hometown of San Diego. This stately and beautiful ship has been sailing the seas since 1863. It is the oldest active sailing vessel in the world. For most of the year, the Star is docked in San Diego and serves as a fascinating walk-on-board maritime museum. But for one weekend each year, she goes sailing.
Would someone please get me this lovely Buddha that is offered for sale at Costco.com (of all places)? the_lucky_duck (who sent me the link) notes that shipping and handling is included. [link fixed 11/15 22:27] 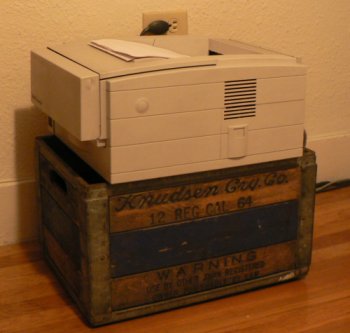 On day one of NaBloPoMo, the_lucky_duck got a free bike. I thought that was pretty amazing. But I had no idea I would be the next winner! Leaving the office on Friday, I espied a laser printer sitting atop a trash can at the northwest corner of 2nd and Bryant. A sheet of paper in the output tray conveyed the handwritten message “Free (works fine).” (Lesson: Blog daily, get free stuff! Who’s next?)

I have wanted a laser printer for some time. Inkjet printers—well, modern inkjet printers*—suck all kinds of ass, unless you print regularly. If you don’t, the ink doesn’t flow right when you fire it up after three months, and you print eighteen hideous pages before you get a clean one. I have had this problem with Epsons and Canons, and I’ve been told that Lexmarks and HPs are no better. You either … read full post »
Longtime readers of this blog know that I think the Chron’s Jon Carroll is the finest newspaper columnist in the land. So I was bummed this morning to read Carroll’s latest, in which he returns from vacation only to pour cold water all over those of us who feel uplifted by the results of this week’s election. “Nothing has changed,” he writes: “Same president, same policies, same corruption, same continuing embarrassments.”

Well, no. Wrong, wrong, wrong. Sorry. “First, a lot of those losing Republican incumbents will immediately move down K Street and become lobbyists,” Carroll says. “They will make substantially more money, and they will get to do essentially the same job: they will write the laws that govern our nation.” I tell you, they may try, but they’re going to be fighting a hard uphill battle. Nancy Pelosi has the destruction of the Republicans’ K Street Machine … read full post »
After—only after—you see Borat: Cultural Learnings of America For Make Benefit Glorious Nation of Kazakhstan, go read Salon’s fantastic account of what’s real and what’s staged in the film.

“I thought we were going to do fine yesterday. Shows what I know.”
— President George W. Bush, speaking of yesterday’s midterm elections in a press conference earlier today

It’s Election Day, and here in Alameda County, the Sequoia e-voting machines are actually not the touch-screen models I’d feared. No, we’re filling out huge-ass paper ballots with ink, and then feeding them directly into chirping electronic readers ourselves. So, we’ve got nice paper trails should we need them, no one is cursing at misaligned screens, and the biggest problem at my polling place was that one of the election workers had misplaced some of the “I Voted!” stickers.

I haven’t been this hopeful on Election Day in a long time. Let’s hope this day is the turning point we’ve been waiting for. Power to the people!
One of the main reasons I am not an iPod owner: I can’t stand the way iPods store their files with scrambled filenames, in a pathetic and half-hearted attempt to curb music piracy. I simply don’t want to deal with the inconvenience of a device that can’t speak to a computer unless that computer is running iTunes (or some Linux-based program that speak iPodese, like Rhythmbox, Amarok, Banshee, or Exaile). A hard-drive based MP3 player should just behave like a damned hard drive.

Enter YamiPod, which seems cool enough to perhaps make me an iPod owner someday. This app lives on your iPod, and runs under OS X, Windows, and Linux. It seems to let you freely copy music to and from your iPod to any computer. Can one of my iPod-using homies give this a look-see and tell me if it’s as cool as I think it is?
If you haven’t yet been exposed to Sacha Baron Cohen, the comedic dynamo behind Borat: Cultural Learnings of America for Make Benefit Glorious Nation of Kazakhstan, it’s either because you don’t have HBO (where his material airs here in the States), or you don’t know anyone British who foisted upon you years ago (before Cohen was known in the States at all) a third-generation VHS copy of several BBC productions by one Ali G, one of Cohen’s characters. (I’m in that latter category, myself.) Ali G is a wannabe-gangsta who somehow cons “important people” into interviews; he positions himself as a means for Power to speak to Youth, but instead repeatedly serves as a means for Power to display its own ludicrous shortcomings. (I love the clip of Ali G “interviewing” professional curmudgeon Andy Rooney. In three minutes, Cohen proves Rooney isn’t just a curmudgeon, but a genuine asshole.) … read full post » 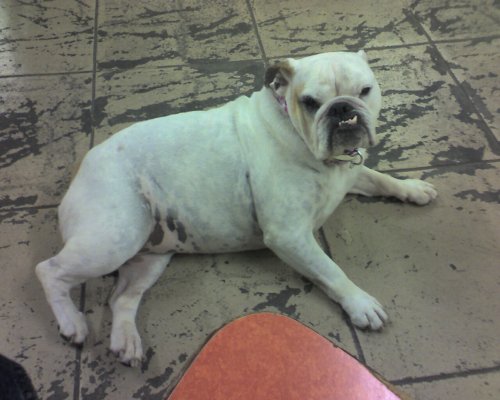 The bulldog I met at the laundromat.
(Double-post today to make up for a busy, postless Saturday. Have I destroyed my NaBloPoMo mojo?)
My alma mater’s longheld desire to renovate its football stadium has hit yet another unexpected snag: It appears that the current plans would effectively destroy the longstanding Golden Bears institution known as Tightwad Hill. I’ve never watched a game from up there, but I’ve always liked the idea that it was a possibility. My hunch is that the university will destroy the Tightwad tradition, just as surely as it has quashed decades of tradition at nearby Bowles Hall.
1. The new Sequoia e-voting machines set to debut in my home county of Alameda next week apparently have a rather awful flaw: “Just push the yellow button and you can vote as many times as you want.” No kidding. And of course, the brain-dead (or are they willfully devious?) public officials who have adopted this horrid technology are still missing the point. They say they’re going to ensure that poll workers watch the machines all day—to make sure there’s no funny business from the voters. Apparently nobody remembers Florida in 2000, which taught us that it’s not the voters you have to worry about, but the election officials themselves, who now have another tool in their arsenal should they decide to rig an election and leave no evidence behind. This is frightening as all hell. The Help America Vote Act of 2002 has proven to be exactly … read full post »

PROBLEM: You want to play the music on your iPod (or other digital jukebox) in the car, where you have a factory head unit with an AUX that only talks to CD changers — and you live in an urban area where all FM frequencies are taken, so those stupid FM transmitter solutions simply don’t work at all.

SOLUTION: The Aux2Car from Peripheral Electronics. You purchase this sucker, plus a customized harness that connects it to the head unit in your particular vehicle. As far as your car stereo is concerned, this sucker is a CD changer, but of course, it’s not. It just talks to whatever device you plug into it.

The whole shebang cost me about a hundred bucks (great prices on eBay…), and it took about an hour to install. The installation procedure includes the setting of DIP switches, which I hadn’t encountered for … read full post »
I am following in the footsteps of HairyAlien and Majordojo and committing to NaBloPoMo, which means I’ll be posting to this blog every day in November. The idea is kind of an intentional reboot. (And besides, I’ve always been too chickenshit to try NaNoWriMo.)

Will you join us? Commit in the comments.
Cory Doctorow hits all the right notes with his scathing critique of the Boy Scouts’ latest move—the creation of a merit badge for “respecting copyright.” You guessed it, the MPAA is behind this.

(UPDATE: Wow, I didn’t know this, but apparently Penn and Teller did a whole episode of their Bullshit! TV program on how the Scouts have effectively been turned into an arm of the Mormon church over the past few decades. I’m gonna have to watch this. The story is well-known to many who have been involved in Scouting during the time period, but it’s a story the mainstream media won’t touch with a ten foot pole. UPDATE 2: Turns out it’s not a merit badge in the original story; it’s an activity badge. The distinction is important, but I shan’t bore non-Scouters with the details.)