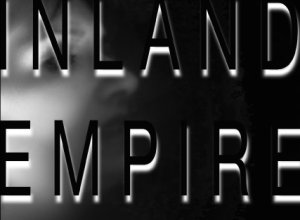 Lynch has also said that his new film is “a mystery.” More like a whole bundle of ‘em. There is a murder—except, no, the victim doesn’t seem to die—while elsewhere, flung far afield in space and time, in grainy, black and white scenes with scratchy sound, there’s another killing—no, make that two—but we can’t quite make out (at least, not on first viewing) who was killed or who did the killing, because (if we look for a linear narrative) our mind races with questions like Was that girl on the stairs—the one with the screwdriver—the same girl who was talking to the cop two hours ago?

If you’re familiar with Lynch’s work, you know how we get here. Eraserhead had the Beautiful Girl Across the Hall, the Man in the Planet, and the Lady in the Radiator; Twin Peaks had the Man From Another Place; Lost Highway had Robert Blake scaring the crap out of us as the Mystery Man. INLAND EMPIRE brings us Visitors #1 and #2, Phantom, Mr. K., the Lost Girl, and a character you won’t even find in the credits, Smithy. Each is key to the unfolding story; each is a powerful, haunting presence in the film. But none of them can be called characters in a conventional sense: We don’t know who they are or why they are doing the odd things they are doing—hell, half the time, we don’t even know what they’re talking about. “This is the kind of shit I’m talking about,” one of Laura Dern’s incarnations spits out at one point. Not only do we not really know what sort of shit she’s talking about, but at this point, we probably don’t even know who she is. She’s definitely no longer Nikki Grace, the Hollywood actress on a comeback march we’re introduced to in an early, lengthy, mostly linear sequence. She’s also definitely no longer Sue Blue, Nikki’s character in the film-within-this-film, On High in Blue Tomorrows. Or is she?

If these mysteries sound engaging (rather than maddening), then dive right in and wrap yourself up in them—you won’t be disappointed. Along the way you will discover the following:

Laura Dern is transcendent. As her characters careen through successive nightmares, the range Lynch demands (and gets) from his lead actress is extraordinary. From an acting standpoint, this is Dern’s movie. She is the focal point of most scenes, and has some particularly riveting monologues. This is the performance of a career.

Lynch never stops painting pictures. He started out as a painter, and still frames every single shot in a painterly way. This film has a look all its own, too, largely due to Lynch’s use of Sony PD-150 digital cameras, which aren’t professional-grade, high-definition models. As he writes in his new book, Catching the Big Fish: Meditation, Consciousness, and Creativity, “The quality reminds me of the films of the 1930s. In the early days, the emulsion wasn’t so good, so there was less information on the screen. The Sony PD result is a bit like that; it’s nowhere near high-def. And sometimes, in a frame, if there’s some question about what you’re seeing, or some dark corner, the mind can go dreaming.” Lynch uses the cameras’ shortcomings to great effect, in the same way that great directors of the black-and-white era, having no color to play with, worked their magic instead with light and shadow. Lynch definitely makes the most of those dark corners he speaks of.


Lynch never stops making music. Sound is extremely important to Lynch. In his book, he muses on the future of cinema, stopping to contemplate the video iPod and its tiny screen. He zeroes in on the good news: “At least people will have their headphones”—all the better to appreciate the soundscapes that inhabit a Lynch film. Every single sound is painstakingly placed into a mosaic that guides you along, sometimes letting you wander, but always tugging you back onto the film’s dreamlike path at crucial moments. Sound also provides several clues to the Russian Doll set of mysteries the film tosses our way. (Here’s a hint: Take note of which scenes feature that scratchy-record sound in the mix.)

Even the players with small parts nail it. Jeremy Irons is spot-on as the longwinded director of On High in Blue Tomorrows. Henry Dean Stanton provides the film’s best comic relief. Grace Zabriskie is out-of-this-world strange and captivating. Julia Ormond is as frightened as confused as she ought to be. I don’t know how Mary Steenburgen found her way into a haze that thick. Lynch is briefly heard from, though not seen. And: No film will ever have a more gratuitous, bewildering, crowd-pleasing William H. Macy cameo than this one.

Lynch deals in engrossing abstractions like no other living director. He explains why in Catching the Big Fish—he’s out to create a world for you to inhabit for three hours: “For me, it’s so beautiful to think about these pictures and sounds flowing together in time and in sequence, making something that can be done only through cinema. It’s not just words or music—it’s a whole range of elements coming together and making something that didn’t exist before… . It’s devising a world, an experience, that people cannot have unless they see that film… . I like a story that holds abstractions, and that’s what cinema can do.”

Take heart: There is an underlying story here. If you’re trained to go looking for symbols when you encounter abstraction, you’re barking up the wrong tree. When Lynch introduced his film at the Rafael Film Center in January, he took questions and answers afterward. He was extremely warm with the audience, except for when one person stated, “Your film is a horror film, and it’s about Hollywood.” Lynch winced and shook his head. “No, no, no, no.” He did not go on to explain what the film is about, but he made it clear that he was just out to tell a story.

I can testify that on repeated viewings—if you work at it, just like a real mystery—all the disparate threads of INLAND EMPIRE start falling into place, and you can actually sit there with other movie geeks and hash out the underlying story. It’s fun stuff. But, yes: As Lynch tells us up front on the film’s poster, on one level, this is simply a film about a woman in trouble. No one who’s seen the film will argue that point; this woman has herself some serious trouble. What makes this film special—what makes it INLAND EMPIRE—is the way it tells the story of a woman in trouble. Thus, Roger Ebert’s first rule of films is once again proven: A film isn’t really about what it is about—it’s about how it is about it. This is the kind of shit I’m talking about. INLAND EMPIRE gets four stars on the Ebert four-star scale. See it at the Lumiere theater in the City before it disappears.