I ordered a used book. It was only a few miles away, in San Francisco, so I figured it would get here soon.

But no: It took more than a week, because first, the USPS sent my book to Las Vegas.

Then back to San Francisco, where the journey began. Then to Oakland—where I live! (Getting close, right?)

But then the book went back to San Francisco once more. And then back to Oakland again.

And then, finally, today, the book arrived.

It must be exhausted.

Esquire’s list of The 75 Skills Every Man Should Master is surprisingly good. (Also surprising: They present it all on one Web page.)

Things I wish I could do: tell a woman’s dress size, hit … read full post »
The “Can a plane on a treadmill take off?” debate returned to BoingBoing yesterday. More than a hundred comments so far. Everybody thinks they’re right; some of them are certainly wrong. Luckily, we get to find out who’s wrong Wednesday night on MythBusters, a show I’ve never seen on some cable network I never watch—but I will, because I want to see happen what I know will happen: The plane will take off. Why? Because Cecil Adams says so.
This morning, John Carroll said:

I mean, come on, it’s New York. It’s the city that never sleeps because people are up all night thinking and fantasizing and making plans. I know where my home is, but I also know where New York is. Being there was like spending time with an old friend.

I know how he feels. I have not traveled the globe nearly as much as I would have liked by this point in my life, but I have made a few dear friends that I do not get to see nearly often enough. I miss my dear friend New York City very much; my heartache over letting many years pass between visits will perhaps be lessened if the 2nd Avenue Deli is in fact reborn by the time I get back there. I miss my more remote friend Amsterdam terribly and despair at the … read full post »
I read planet.gnome.org on weekday mornings, mostly to find out what’s happening in Gnome development. But the geeks who build my interface of choice frequently have great posts on non-techy topics, too. Two from this week: read full post » 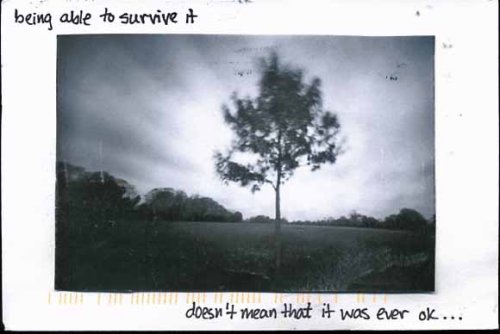 Here’s a first: PostSecret is a site I’ve blogged about before, but somehow I forgot all about it, only to rediscover it recently and fall in love with the concept all over again. New secrets are posted (and all old secrets removed) each Sunday. To contribute, all you need is a postcard, a secret, and a stamp.
This is just a snippet of today’s wonderful Jon Carroll column:

… I was thinking about the masks we all wear when we go to work. The masks correspond to the roles we are asked to play, and also to the ambitions we may have for eventual advancement. For some people, their mask is heavy because there is a chasm between what they do and who they are. They are not actually smiling and subservient, and they do not believe that the customer is always right, and they do not believe that the person above them is by definition more competent than they are, but they pretend. They play the role. If they want a check at the end of the week, they have to play the role.

If you’ve been playing the role for a long time, you are a “professional.” “She’s a real pro,” people will say, …

“The reason I’m here today, the reason I own a brand new Harley-Davidson motorcycle and the reason I have a big log cabin and I got cars and all kinds of stuff is because I’m a writer and writers own everything.” — Dan Aykroyd [emphasis mine]

Pictures of dog noses just make me feel better about things.
Would someone please get me this lovely Buddha that is offered for sale at Costco.com (of all places)? the_lucky_duck (who sent me the link) notes that shipping and handling is included. [link fixed 11/15 22:27]
…a man who never lived had a relatively ordinary day. Quite extraordinary! Happy Bloomsday, everyone!

I usually mark the day by wearing black (as Bloom did), having a cheese sandwich and perhaps some Burgundy for lunch (as Bloom did), and getting ripped on Guinnesses in the evening, but as I am currently on day 20 of a 28-day kidney and liver cleanse diet that prescribes no dairy and no alcohol (along with no meat, no bread, no eggs, none of your usual grains, no legumes, no pasta, no sugar, no salt, no processed foods, no foods cooked in oil, etc.), I’m having to settle for just wearing black. On a gorgeous, bright, warm sunny day. Sigh.

[Also of note: very exciting news in the Joyce world this week. More here and from The New Yorker (!) here…]
Six years ago today, Chronicle columnist Jon Carroll published what I still feel is the finest single newspaper column ever. I’ve kept a copy tacked to the wall of my cubicle at work ever since, and when I am feeling down, I often read it for a nice little shot of pronoia. I mean, my socks are dry. What more is there?
Ten years ago (!) yesterday, my day started off as usual: I rose from my twin-sized bed in a large house on MLK in Berkeley; I donned my bathrobe, walked downstairs, and grabbed my copy of the Chronicle, which I subscribed to back then, the Web having not really taken off yet as a primary means of gathering one’s news. It’s weird, now, thinking back to days when the dead-trees version of the paper was something I not only paid for but looked forward to each morning. How alien!

Anyway, in 1996 local legend Herb Caen was still alive, still writing the best three-dot column anywhere. His need for more “items” was insatiable, and one time, I happened upon something that seemed item-worthy, so I sent it in. And on that splendid Tuesday morning ten years ago, I damn near had a heart attack when I saw my name … read full post »
Today Chronicle columnist and fellow Oaklander Jon Carroll wrote:

For want of a better word, I called the space outside the walls “sky.”

The rest of the piece is definitely worth reading. I think I know what Carroll is talking about: A couple of years ago now, I was sitting in a room of my own when there was suddenly a fantastic explosion that blew the walls out about three feet, and the sky just poured in. Everything has been different since … read full post »
“PostSecret is an ongoing community art project where people mail-in their secrets anonymously on one side of a homemade postcard.”

[spotted at robot wisdom]
I remember reading this Malcolm Gladwell piece in the New Yorker back in 2000, and am glad to see it up on Gladwell’s site, since the New Yorker doesn’t put their archives up on the Web. I think that every woman on the Pill should give this a read. Synopsis: The Pill’s chief designer didn’t know as much about how women’s bodies “should” work as he thought he did. Result: Uncertain, but there’s a lot of interesting info in here that I’d imagine you’d be interested in if you are putting a chemical into your body every day that affects your reproductive system. There’s also some discussion of the article over at MetaFilter, where I found the link today.

I’ve said it before and I’ll say it again: Three cheers for rubbers and diaphragms! 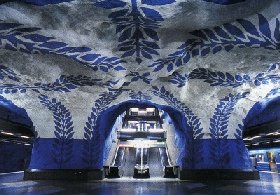 Here’s an amazing collection of photos from subway stations around the world, highlighting some remarkable architecture and public art. Sweet Jesus, I’ve gotta go to Stockholm!

[been meaning to post this for a while; I’ve forgotten how I found it…]
We are extremely lucky to live in a part of the world where the water that flows from the tap is potable. (I have a friend in India who’s only known that luxury during the years she lived here.) This fantastic op-ed at the New York Times reminds us that bottled water, the trendy alternative so many of us adore, is just plain evil. My brother, a civil engineer who knows a thing or two about what happens to our tap water in this country, told me years ago how big a crock bottled water is, and gave me this fantastic tip: If you don’t like the way your tap water tastes, let it settle in a refrigerated, glass jar. And as for any concerns you have that your tap water ain’t safe to drink, here’s the scoop: It’s very likely safer than that designer H2O … read full post »
This has been making the rounds the last couple of days, but perhaps you have not seen it: La Pâte à Son is an amazing, goofy, wack-ass music making machine that will gobble up a whole bunch of your time if you’re not careful. (Shockwave required.)
Here we have a list of the “read full post »