I have been a political junkie for as long as I can remember. My father was a professor of political science, so in my 1980s childhood home, the single television screen was tuned to at least 90 minutes of news each night, plus what few political programs there were in the era before multiple cable news outlets. I remember PBS's Washington Week in Review being a favorite on Friday nights -- along with the MTV Friday Night Video Fights and Night Flight. (Any Night Flight fans out there? Sometimes I think I am the only person who remembers it.)

May Joe Biden turn out to be exactly the sort of leader our country needs in this frightful historical moment.

“I have close family members and friends who are a member of the gay and lesbian community. Those folks include my daughter Lisa, as well as members of my personal staff.

“And I encourage you all to go shopping more.” — President George W. Bush in his year-end press conference this morning

“Buy more. Buy more now. Buy. And, be happy.” — OHM, the mechanized prophet of the totalitarian state in THX-1138

Longtime readers of this blog know that I think the Chron’s Jon Carroll is the finest newspaper columnist in the land. So I was bummed this morning to read Carroll’s latest, in which he returns from vacation only to pour cold water all over those of us who feel uplifted by the results of this week’s election. “Nothing has changed,” he writes: “Same president, same policies, same corruption, same continuing embarrassments.”

Well, no. Wrong, wrong, wrong. Sorry. “First, a lot of those losing Republican incumbents will immediately move down K Street and become lobbyists,” Carroll says. “They will make substantially more money, and they will get to do essentially the same job: they will write the laws that govern our nation.” I tell you, they may try, but they’re going to be fighting a hard uphill battle. Nancy Pelosi has the destruction of the Republicans’ K Street Machine … read full post »

“I thought we were going to do fine yesterday. Shows what I know.”
— President George W. Bush, speaking of yesterday’s midterm elections in a press conference earlier today

1. The new Sequoia e-voting machines set to debut in my home county of Alameda next week apparently have a rather awful flaw: “Just push the yellow button and you can vote as many times as you want.” No kidding. And of course, the brain-dead (or are they willfully devious?) public officials who have adopted this horrid technology are still missing the point. They say they’re going to ensure that poll workers watch the machines all day—to make sure there’s no funny business from the voters. Apparently nobody remembers Florida in 2000, which taught us that it’s not the voters you have to worry about, but the election officials themselves, who now have another tool in their arsenal should they decide to rig an election and leave no evidence behind. This is frightening as all hell. The Help America Vote Act of 2002 has proven to be exactly … read full post »
Molly Ivins’s latest piece—a barnstormer about why she won’t support Hillary in ’08—actually has me feeling better about our country than anything I’ve read in a good long while:

read full post »
On the ballot I filled out yesterday for our Special Election, there were only eight items: the eight statewide propositions. (There were no local issues in Oakland.) I gleefully went to my polling place and electronically checked “NO” eight times. It was the most fun I’ve ever had at the ballot box. It felt shockingly good. And I wasn’t doing this just because I think the initiative system is terribly out of control—none of the props were worth supporting. Every single last damn one of them had fatal flaws, even the ones that good folks managed to sneak onto Arnold’s Ballot of Evil.

I awoke this morning to hear on the radio that all eight measures went down in flames. So for the first time in my life, the complete results of an election matched my own votes exactly. How much you wanna bet that never happens again?
In 1997, in a handwritten note to Harriet Miers, George W. Bush wrote:

[spotted at Boing Boing]
Troubletown’s E-Z Guide to Today’s Economy seems accurate, and is a perfect encapsulation of the economic reasons why fleeing this country might be a good idea. (I’m still looking for a nice encapsulation of the cultural reasons getting the hell out sounds like a better idea all the time…)

[spotted at Robot Wisdom. Wanna learn more? Read this from Molly Ivins.]
Have you made up your mind on John Bolton, W’s nominee to represent us at the United Nations? Even if you have, you won’t believe this 90-second QuickTime video of Bolton first stating his view that “there is no United Nations” and then proceeding to go absolutely apeshit when someone (in this case, a very mild-mannered individual) has the audacity to politely disagree with him in a public forum.

This guy is both a moron and an ass. It will be a very sad thing if the Senate confirms him. There is no place in diplomacy for people who lose their cool and begin shouting when confronted with opposing ideas. Diplomacy is all about working with people when ideas clash. That’s why we call it DIPLOMACY, dammit!

[spotted, oddly enough, at The Huffington Post]
Ya still think our compassionate-conservative Republican majority has the interests of average Americans in mind? Have you heard about the bankruptcy bill that just passed the Senate and will now certainly pass the House? No? Pay attention.

[link updated to one that doesn’t require login; sorry about that!]
Bob Woodward has long maintained that when Deep Throat dies, we’ll all finally find out who he was. According to John Dean, it all may happen soon:

Bob Woodward, a reporter on the team that covered the Watergate story, has advised his executive editor at the Washington Post that Throat is ill. And Ben Bradlee, former executive editor of the Post and one of the few people to whom Woodward confided his source’s identity, has publicly acknowledged that he has written Throat’s obituary. 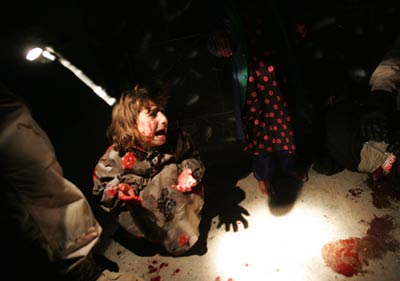 [photo by Chris Hondros for Getty Images]
There is a fantastic and lengthy documentary series about the Civil Rights Movement called Eyes on the Prize. I am lucky enough to have seen most of it during my public-school education. It’s an amazing piece of work that drives home to “the kids today” just how different America was prior to the social upheaval of the 1960s, and how hard that entire fight was.

Alas, due to the way that our unbalanced system of copyright and “intellectual property” laws function, you pretty much can’t see this amazing educational material anymore. And this isn’t the only bit of our history that big corporations are walling off. There’s more in a great article at the Globe and Mail. The Washington Post has more, but they’ll make you register to read it.

[of course, BugMeNot can help you with the WaPo; this material spotted at Copyfight]
Ethically-challenged House Majority Leader Tom DeLay has shown the world his true colors once again. On Tuesday, at the traditional Congressional Prayer Service that helps kick off a new Congressional session, DeLay read a passage from the Gospel of Matthew. It has to do with the homes of non-believers being swept away by the mighty flood of Tom DeLay’s God:

And everyone who listens to these words of mine, but does not act on them, will be like a fool who built his house on sand:

The rain fell, the floods came, and the winds blew, and buffeted the house, and it collapsed and was completely ruined.

DeLay is, at best, an insensitive prick. At worst, he’s the sort of fundamentalist who honestly believes that people who don’t believe in His God deserve to die. In either case, he’s an embarrassment. But this is where we’re at as 2005 begins: … read full post »
People keep asking me what I think about the election. They usually ask because they recall that I studied Political Science and know that I’m a political junkie. They very rarely like what I have to say, and want to argue with me, which is exactly why I don’t discuss politics with friends very much, because I despise political arguments. Especially because, well over fifty percent of the time, it’s clear that the person trying to argue with me isn’t even familiar with the fucking Constitution. Folks, if you want to speak intelligently about the political system that governs your life, you need to go back and fill in the knowledge gaps you earned by sleeping through your civics class back in high school. Don’t come around telling me what Congress should and should not (or could and could not) do until you can tell me who the majority and … read full post »
Change comes slowly at The New Yorker. From its inception in 1925 until sometime in the 1960s—I once nailed down the date by combing through old issues in the library at Cal—it didn’t even sport a table of contents. When Tina Brown became editor in the 1990s, photographs and letters to the editor appeared for the first time. (When Spy magazine was still around, it used to print “Letters to the Editor of The New Yorker,” since The New Yorker didn’t.)

The current (masterful) editor, David Remnick, has made a few evolutionary changes to the pub himself, but none as striking as the magazine’s first-ever endorsement of a presidential candidate, which has grabbed a lot of buzz today. It’s no surprise who they’re behind—the mag has been relentless in its coverage of the Bush administration’s lies and missteps—but the rather lengthy argument presented (which apparently unfolds over five … read full post »

Bush’s supporters demand lock-step consensus that Bush is right. They regard truthful reports that Saddam Hussein had no weapons of mass destruction and was not involved in the September 11 attack on the US—truths now firmly established by the Bush administration’s own reports—as treasonous America-bashing… . Conservatives don’t assess opponents’ arguments, they demonize opponents. Truth and falsity are out of the picture; the criteria are: who’s good, who’s evil, who’s patriotic, who’s unpatriotic… . These are the traits of brownshirts. Brownshirts know they are right. They know their opponents are wrong and regard them as enemies who must be silenced if not exterminated.

Paul Craig Roberts (a conservative) explores how the Right lost its taste for the truth.